This article is based on scientific evidence, written by experts and fact-checked by experts.

This article has been medically reviewed or fact checked to ensure factually accurate information.

Ready to break through the barriers of negative thinking and become more positive, grounded, and fulfilled? Here are 5 books that will help.

Positivity means different things to different people. It can infer a can-do attitude, happiness, a sense of achievement, self-respect, or perseverance. There are innumerable positive thinking books out there, and I’m excited to share five that have helped me reshape my views.

And could this list come at a better time?! It’s all too easy to be brought down by all the bizarre, frustrating, terrifying, terrible, heartbreaking, puzzling, ground-hog-day-ing, negativity swirling around the world these days. A few grounding books might be just what you need. Each one of these books on positive thinking examines positivity from a different angle: neurology, actuation, not giving a f*ck, spirituality, and optimism. I encourage you to dive into each to help you solidify what it truly means to look on the bright side and, most importantly, how to do it. 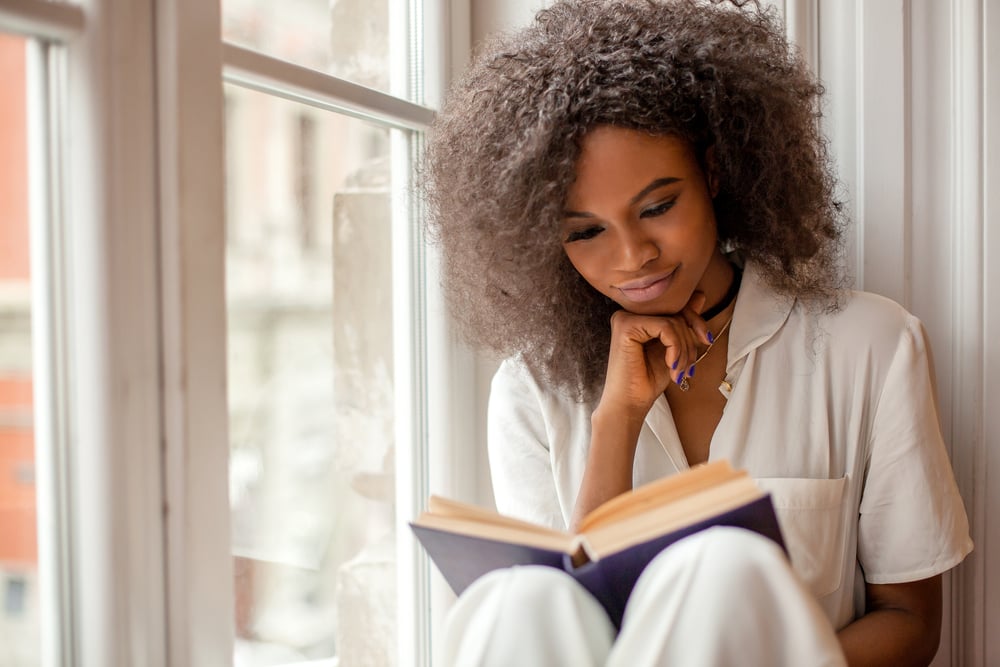 The Science of Positivity, Loretta Grazaino

Can science solve negative thoughts? Loretta Graziano Breuing, PhD seems to think so. The Science of Positivity examines positivity through the lens of its antithesis: negativity. Breuing examines the how’s and why’s of negative thought patterns and provides neurological hacks for overcoming them. She empowers readers to rewire their thinking and create new mental habits that open the doors to permanent optimism.

The Science of Positivity is one of the best books on positive thinking for people I empathetically call “happiness skeptics.” If you’re overly certain that we can’t change the cards we’re dealt, this book will blow—or rather, change—your mind. As the title suggests, it uses hard science to help you dismantle cynical thought habits and see the world in a whole new way. It gave me a new definition for the term “re-mind.”

When we detox our bodies, we flush out toxins. When detoxing our mind, we flush out negativity (AKA toxic thinking). I’ve never read another book on positive thinking that so perfectly bridges physical/nutritional health with mental/emotional health. Boyle, who’s a certified yoga instructor, energy healer, and psychology professor, outlines a clear path to positivity using her seven-step C.L.E.A.N.S.E. method to expel negative mindsets like fear, anger, and doubt, to make space for positive mindsets and behaviors. Clear your pathways. Look inward. Emit positivity. Activate. Nourish. Surrender. And finally, Ease your way into your best, and happiest, self.

Boyle relays her own heavy emotional hardships, such as her husband’s affair, to underscore how you can work through seemingly unbeatable negativity to find acceptance, joy, and total health. Why I feel Emotional Detox is one of the best positive thinking books is that it’s both optimistic and actionable: you can start changing your mindset from the very first chapter.

The Subtle Art Of Not Giving A F*ck, Mark Manson

You know how we always say that we don’t care what anyone else thinks, even though deep down inside we actually do? This book teaches you how to not do that! But not only does it emphasize the importance of not giving a damn, it shows you the things you shouldn’t give a damn about.

This is one of the best positivity books out there because it tells it like it is; nothing is sugarcoated. In fact, Manson posits that it’s all the sugarcoating, delicate phrasing, and participation trophy winning that spoiled an entire generation (ahem, mine 🙋‍♂️).

If you’re committed to change, can handle real talk (plus the occasional f-bomb drop), and are willing to accept and embrace your limitations, fears, faults, and truths in order to come away more courageous, honest, responsible, and accepting than you ever imagined, pick it up immediately. True positivity awaits.

The Power Of Now, Eckart Tolle

Simple and profound. The Power of Now has earned a sweeping reputation as one of the most stirring and actionable books on positive thinking in relation to your mind and living in the moment. It’s an accessible and enlightening guide to personal growth and sustained happiness. (Maybe that’s why it’s sold over 2 million copies.) Ask Oprah Winfrey and she’ll tell you it helped her cope with September 11th, and in 2002 was featured on “Oprah’s Favorite Things.”

So what makes it one of the best positive thinking books? Well, basically every single page. Tolle uses simple language to break down 10 fundamentals (let’s call them secrets) of spiritual wellness through “being present.” After all, that’s where life happens: the present. You’ll grasp concepts that at first seem simplistic and obvious, but which are downright life-changing at their core.

If you’ve ever been stifled by anxiety about the past or the future, if you’ve ever felt too inside your own head, you’ll want to read this start to finish. Now.

Always Looking Up: The Adventures of an Incurable Optimist – Michael J. Fox

“I used to cry because I had no shoes, until I met a man with no feet.”

Sometimes, positivity is a matter of perspective. And perspective is something that actor, philanthropist, author, and optimist Michael J. Fox knows all about. After being diagnosed with Parkinson’s Disease in 1991, and a subsequent battle with depression, Fox became an activist for PD research.

In Always Looking Up, Fox shares moving stories about his battle to gain a new perspective on life in the face of an incurable disease, and how it led him to see challenges for what they really are: opportunities. His anecdotes are delivered in sections, not chronologically. “Work” reveals how he created his non-profit and the optimism with which he seeks a cure for Parkinson’s. “Politics” reveals the tedious and aggravating encounters trying to push awareness for the disease through our national political machine. “Faith” and “Family” show what drives his energy, focus, and love. Page after page, Fox is honest, witty, affable, and inspiring. Even as he jokes about his short stature, you can’t help but look up to him.

One thing you’ll take away from these books on positive thinking is that positivity takes work. Embarking on your positivity journey will hopefully lead you to deep happiness. As it turns out, one of the key underlying factors in happiness is a strong sense of community. [1, 2] Community can mean your neighborhood, a tight friend group, even a book club. 😉 It can even be a supportive online community, such as SkinnyFit’s Facebook community, where roughly 40,000 women actively share thoughts, encouragement, life lessons, and health tips. Even a few more positive thinking books to add to your reading list.

Spencer is a lifestyle writer, culinary adventurist, and part-time health nut. He loves finding healthy hacks to not-so-healthy cuisine, and writes passionately about cocktails and coffee. When not writing, you can almost certainly find him lying in a hammock or driving the coast in search of sur

How To Get Rid Of Bloating Fast! (+ 6 Bloating Remedies That Actually Work!)

5 Simple Things You Can Do To Accelerate Fat Loss

7 Ways You Can Actually Gain Weight In Your Sleep! (+How To Fix)